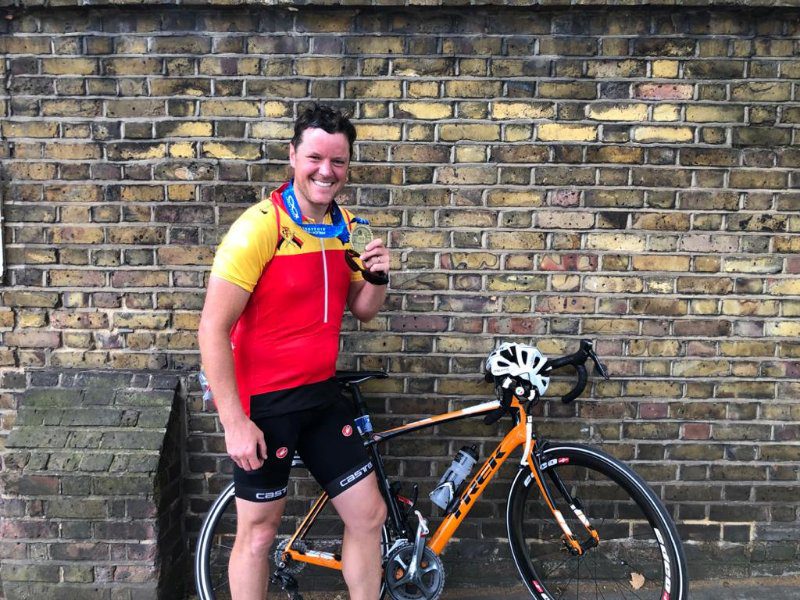 Starting at 5.45 on a Sunday morning in August  I managed to peddle my bike on closed roads ( No cars or any other traffic allowed) for 100miles. It was a fantastic experience.

Starting at the Olympic stadium and then through central London passing the previous night’s clubbers making their way home the ride then took us up through Chiswick and the through Richmond park. It is quite a sight to see one huge snake of 70,000 cyclists passing through one of London’s most picturesque parks in the early morning. I am not quite sure what all the deer thought of these strange  humans in multicoloured Lycra…

Coming out of the park the route entered Kingston which is the cycling gateway to the Surrey hills. The toughest part of the race was ahead and included some challenging but stunning hills namely Newlands Corner, Leith hill and the iconic Box Hill which formed part of the London 2012 cycling route.  70 miles into the route at this stage and the route was now bringing us back to the capital. The market towns of Dorking and Kingston provided some great and much needed support from friends and family before hitting Wimbledon and then Putney. Cycling down Putney Hill and on to Putney Bridge at almost 40miles an hour is quite an experience.

The final stretch ahead I somehow found a last bit of excited energy to take me along the embankment, round the Houses of Parliament and then onto the Mall to clock the 100th mile at Buckingham Palace.  It was amazing.

Having been a recipient of the heart screening provided by the Richmond Heavies Foundation the ride gave me the perfect opportunity to have some fun but also promote the Foundation’s work and raise some money to continue their amazing aim to get more people screened and detect any issues before it is too late.

Every time I put on my Richmond jersey in I think of my rugby mates that sadly passed away back in early 2018. Their legacy is now such that we can help prevent fatal incidents through the work the Foundation does and the heart screening it provides. It was a no brainer to help raise funds for the Foundation and help raise money and awareness for what they do.

I was delighted to achieve a Ride London 100 time of 4 hours and 38mins which was in the top 5% of the 70,000 riders. More importantly I was super proud and thankful for all those that sponsored me for my fun but exhausting challenge. I raised over £1,100 for the Foundation and also raised a glass to those that promoted the birth of the Foundation. They are naturally greatly missed but are still very much a massive part of the Richmond Rugby Community.