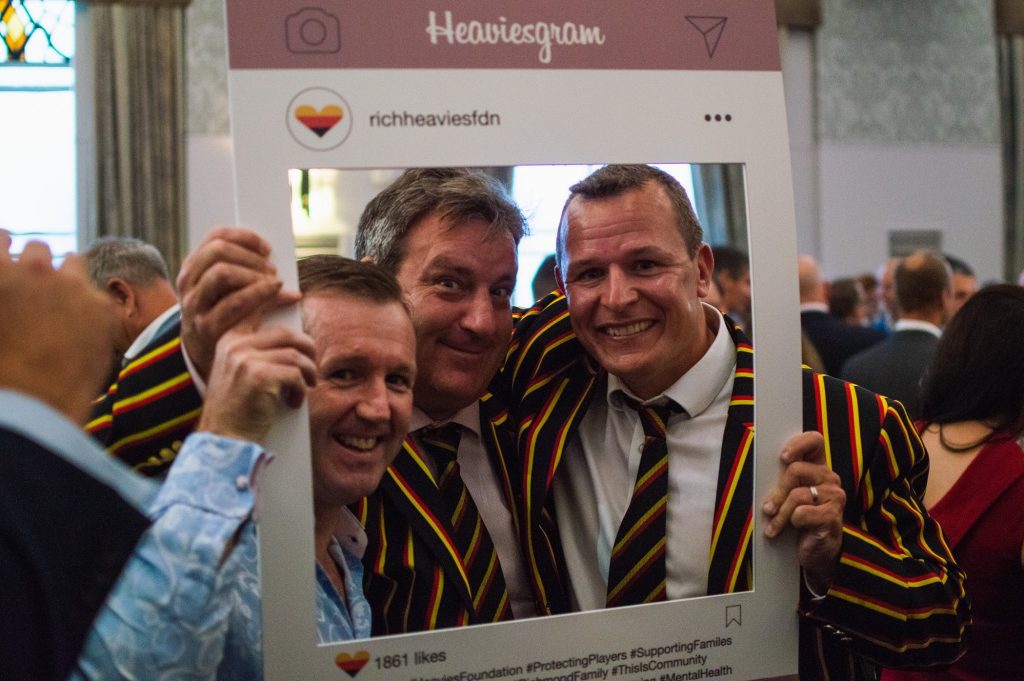 Following the success of the inaugural Richmond Heavies Foundation lunch in 2018, we returned to the wonderful Grand Connaught Rooms for the sequel, on Friday 20th September 2019. Being just days before the phenomenally successful Rugby World Cup in Japan, there was an undoubted sense of optimism and hope in the room.

Your Foundation trustees being gentlemen of a certain age and therefore resistant to too much change, the format for the 2019 edition followed closely that of 2018. Gin tons flowed as friends old and new caught up at the drinks reception. We were delighted to support a young rugby player from Ealing Trailfinders who sustained a serious injury to assist with his care and rehabilitation through the sale of the ever-popular Foundation heart-shaped pins.

The beautiful singing voice of Milly Underwood escorted the assembled throng of [520] into the main dining room for lunch. The less beautiful, but oh so forceful and masterly tones of Mark Durden-Smith (from the telly) then got proceedings proper underway.

Foundation trustee, Richard Holman, delivered parish notices and updated on what had been achieved to date, and our plans for the future. Hush descended on the throng as an incredibly moving video was played, reminding us why we were all there, and including interviews with the families of our fallen friends. They talked about the impact the foundation has had in supporting them in the year and a half since the tragedies, and their hopes that the work that we are doing might help prevent future tragedies. As if we weren’t moved enough, our great friend, and father of Ian, Philip “Tonka” Williams, said grace.

Starters were followed by an interview with Olympic Gold Medallist rower, Greg Searle, who talked about his own challenges with a heart condition, having compered a round of “Try or no Try”. His story of coming out of retirement at 38, and winning an Olympic bronze medal in the Eight at London 2012 Olympics was, shall we say, a little humbling. That said, he’s never faced the Army Masters, so can’t be that brave or determined.

Main course was followed by MDS interviewing, Austin Healy, Alex Goode, and Rachael Burford. Austin part owns Legend Events, who organised this year’s event, so a very large thank you to him and the team for putting on such a well-run do.

Onto the auction, led by our very own Addison Gelpy (from the telly), with a range of prizes from sporting events, to holiday cottages.

An interview with England tweaker, Graeme Swann brought the formal side of the day to a close, mainly focusing on the particular eccentricities of Kevin Pietersen.

Overall, the day raised a staggering £60k, which will be a huge help to delivering the ambitious plans we have for the Foundation for 2020 and beyond. Our work and plans are catalogued elsewhere, but without the support of the Richmond family, and the wider rugby community, we would not be able to deliver on our mission to Protect and Support.

As has now become custom, we retired to leading nightspot, SWAY to “debrief” and ensure we were all optimally refreshed, to reflect on a great day, and to remember our friends who lost their lives in that terrible 6 week period in 2018. We miss them hugely, but are committed to providing a fitting legacy via the Foundation.

To view more photos from the day visit our Facebook page